In this coloring 3D-elements are modelled by special mathematical algorithm in the uniform composition creating illusion of multidimensionality and dynamics of the plane. It opens absolutely new, though since the birth given to us the nature spatial thinking which for the unclear reasons we don't develop. It is necessary to correct this. The person is simply obliged to aspire to perfection and to develop given to him the talent nature.

We assume that the disproportion which has developed by centuries between development of the left and right cerebral hemisphere is at the bottom of deviations of mentality and behavior of the person from the accepted norms that always conducted mankind to negative consequences.

Development figurative and spatial thinking will allow the person to open in himself dozing new possibilities. The brain will work more balanced and new possibilities of intelligence will open. The person can contemplate any problem from various spatial foreshortenings and make on it the best decision.

Traditional educational systems are around the world directed on development of knowledge and mental abilities of the person with use of logic thinking. Thus the disproportion in development of the left and right hemisphere isn't leveled and in some cases even goes deep.

Offered coloring contains the drawings representing figures causing illusion and dinamics of the space. The child, peering into images on the plane, mentally plunges into volume space and starts to see the world in a different way. Even simple examining of these drawings allows to intensify new thought processes and their coloring does this process several times more effective.

With practice and researches it is confirmed that people with the developed figurative thinking are more successful in life, they practically don't allow mistakes in decision-making. Their mentality is more balanced. They adhere to higher moral principles.

The developing game invented by Leo is the additional instrument of creation of new human society in which the order and the general harmony both all mankind and each personality will reign. Developing in itself this natural gift we will open new mental abilities dozing in us. 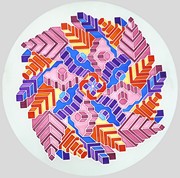