All know of shortcomings of the existing internal combustion engines (ICE). They are  crank and connecting rod mechanism and big weight  and rather thin control of system of admission/ignition, mufflers (for example, correctly adjusted resonant muffler increases ICE capacity to 30%), and 4 timing period of ICE (from 4 courses of the piston only one is "worker", the others 3 are idle running)  and many other things. About advantages it is also well known .  Piston internal combustion engines are the most economic and simple of all types of engines. Certainly  without considering the "exotic" engines which design  is too difficult for production (the engine of Stirling) and because of poor quality of modern materials. They possess  inadmissible a small resource (rotor and piston and some other). All types of modern transport cause big damage to the biosphere, but the motor transport is most dangerous to it. Today in the world are about 1 billion cars. On the average each of them throws out per day 3,5 – 4 kg of carbon monoxide, a significant amount of oxides of nitrogen, sulfur, soot. When using ethylated (with lead addition) gasoline,  this highly toxic element also gets to exhausts. "Contribution" of the motor transport to pollution of the atmosphere is today, for example, in the majority of regions of Russia not less than 30% of total pollution. Cars spend a huge amount of fuel. And its natural sources is ended. Considering conditions under which internal combustion engine work is performed, we see similarity to conditions under which it is made operation of the steam engine. 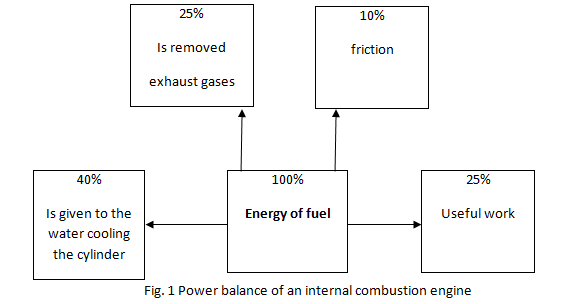 Here too there is an existence of a difference of temperatures:    on the one hand,  heat source (in this case a source of heat is chemical reaction of burning,  for example,  coal) creates high temperature of working substance  which is vapour;  on the other hand, there is an enormous reservoir in which turning-out warmth is dissipated . It is the atmosphere which plays a refrigerator role. At this efficiency of the steam engine makes less than 10%. In ICD temperature of the gases which are turning out at combustion of a mixture in the cylinder, is quite high (over 1000 C). At this efficiency of internal combustion engines is much higher than an efficiency of steam engines. In practice, despite all

The vast majority of cars on a planet still use the internal combustion engine (ICE) invented in the XIX century. Naturally, it isn't necessary to speak about profitability of ICE, especially if to consider that modern cars burn on 10-20 liters of fuel on 100 km of a way. It isn't surprising that scientists try to create available alternative engines . They are electric and hydrogen engines. However  the concept of an internal combustion engine didn't settle modernization potential. Thanks to the last achievements in the field of electronics and materials there is an opportunity to create rather effective ICE.  Engineers of the EcoMotors International company creatively processed a design of traditional ICE. It kept buckets, connecting rods, the crankshaft and a flywheel, however the new engine is 15-20% more effective. It  is besides much easier and cheaper in production. Thus the engine can work with several types of fuel, including gasoline, diesel fuel and ethanol.

As a whole the EcoMotors engine has an elegant simple design in which is 50% less  details  than in the ordinary motor.  It was succeeded to achieve it by means of use of an opposite design of the engine in which the combustion chamber is formed by two buckets  moving towards each other.  Thus the engine is  duple.  It consists  of two modules  with  4 buckets in everyone which is  connected by a special clutch with electronic control.  The engine electronics allows to achieve high efficiency and the minimum fuel consumption .

Also the motor is equipped with a turbocompressor steered by electronics which utilizes energy of exhaust gases and develops the electric power. The engine has no block of a head of cylinders and it is made of usual materials and publishes less noise and vibrations. Thus the engine turned out very easy: on 1 kg of weight it gives out power more than 1 h.p. (in practice it approximately twice easier  of traditional engine of the same power).

Experts counted that if to increase efficiency of all internal combustion engines (ICE) at least by one percent  the world economy will win more than one trillion dollars.  But the laws of classical thermodynamics formulated two centuries ago, defined a ceiling for efficiency of thermal cars.  In everything the French military engineer Sadi Carnot who calculated a standard of determination of efficiency for thermal engines "is guilty".  Only the part of chaotic energy of heat can be transferred to work.  And though heating engineers tried  nobody managed to go beyond an iron formula.

One  exit of a similar situation is use of pneumoengines.  I.e. not to set fire to a fuel mixture but  to create an excessive pressure which will push the bucket  using the compressed air.  It is quite possible. Absolutely no difference that what will push the bucket.  The main thing is that wheels twirled.

Thus there are no basic restrictions for transformation of an internal combustion engine to its pneumatic analog.  Moreover  throughout automotive industry history similar attempts were repeatedly made.  Vehicles on the compressed air for movement use pneumoengines in which as fuel the air reserved in cylinders is applied.  Similar drive gear call pneumatic.  In it instead of burning of a mixture of air with fuel and the subsequent transmission of energy by  buckets they  use the compressed air.

As fuels it is possible to call the main benefit of application of the compressed air environmental friendliness. For filling of the car usual atmospheric air is used. Significantly becomes simpler  a design of the similar engine. Need of storage of combustible liquids disappears and there is no need to pull conducting and to develop difficult ignition systems. The power plant for similar cars is a tank with the compressed air and  the intermediate gears giving the necessary portions of air  and also a working zone in which the turbine takes place. Practically there is nothing to break.  Such system has phenomenal reliability. On the gas station usually applies the electric compressor who  squeezes  air from the atmosphere and makes its downloading in a tank.   Phenomenally low cost and an inexhaustible stock of "fuel" for pneumatic cars too it is far not on the last place. On it advantages of similar cars come to an end.  Time came to talk about shortcomings.

It is possible to call a basic problem that the air compressed to 300 bars, namely it is the standard for modern automobile gas stations, bears in itself only 1% from that energy which consists in a high-grade petrol. And at low temperatures this energy is even less. From here problems appear.

1 . Low speed. The record which is recorded in the Guinness Book of Records for pneumatic cars is equal 129.2 kilometers per hour.

2 . Low capacity. At modern pneumatic circuits the maximum capacity is equal  only  75 h.p.

3 . Today most "long-range" pneumomobil can pass about 200 kilometers at one gas station.

4 . Need of creation in the world of a network of fuel stations.

During the operation of the engine (usually it is ICE) working gases push buckets which rotate the crankshaft etc. Shortcomings: irrational use of pressure of gases from fuel combustion therefore the remained pressure simply is destroyed by engine mufflers; fuel delivery and air systems are very difficult and expensive at differential of load of the engine; the engine needs heavy-duty materials; torques are low. Taking into account all this today it is necessary to try to find some essentially new solution which will provide the market cheaper and simple in production and more effective automobile engines on traditional types of fuel. Therefore  logical the thought of association of advantages of the steam engine and ICE in a form technical solution and creations of such engine  is quite natural.

Below one of options of the new power unit for cars, vessels, etc. is considered.

The huge advantage of this power plant is its environmental friendliness. All heavy fractions settle on a bottom of a receiver and are periodically removed via the valve in the special reservoir. 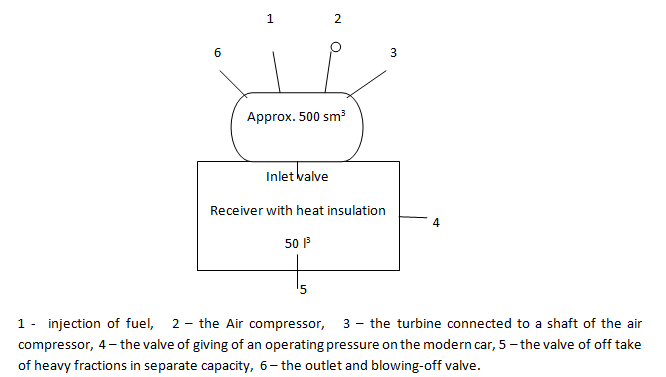 One more feature of a proposed technical solution is  obligatory warming up of a receiver and maintenance of temperature of its internal volume about 900-1000 degrees Celsius . That in practice is reached for some cycles of giving in a receiver the gases from a combustion chamber in the presence of a good heat insulation of the receiver. For ensuring of independence of characteristics of the propulsion system from ambient temperature it is expedient to carry out compulsory heating up of a receiver.

By estimates at the volume of receiver of 50 l and combustion chambers of 0.5 l loss of products of burning  will make no more than 1% which are dumped through an outlet valve on the turbine.  As a result an efficiency of the power plant can reach 80-90%.  The proposed technical solution will allow to create new power plants which are incomparable more effectively, more favourably and more simply in production.  They will have many times over big torques and are more economic and eco-friendly.

The proposed technical solution completely eliminates a steam-engine defect where about 90% of energy departed  “ to a tube”. The offered power unit doesn't require a gearbox unit that also increases efficiency and reduces its noisiness and cost of production.

In the power unit  according to a proposed technical solution  it isn't created ultrahigh pressure. In an active receiver there is no change of loadings that allows to dose  amount of fuel and pumped air in a combustion chamber for complete combustion. At a big torque there is no need of installation of a gearbox unit. There is also no need of production of heavy-duty cylinder blocks and heads since pressure in the offered unit in times is less  than in modern ICE. Production of offered motive units will be incomparable more simply and respectively cheaper  than ICE.

I am convinced that the proposed technical solution will allow to create engines of new generation. It is wide  the sphere of their application is an automotive industry, production of compressor stations, production of ship engines, etc.